A 1.6V high voltage MXene micro supercapacitor has been developed by Dalian Chemical Research Institute of Chinese Academy of Sciences

As a new type of two-dimensional material, MXene is one of the key materials for micro supercapacitors with high conductivity and ultra-high volume capacitance. However, MXene is easily oxidized under high anodic potential in water electrolyte, and is limited by the electrochemical stability window of water, resulting in the operating voltage is usually less than 0.6V, which greatly limits the energy density of MXene micro supercapacitor.

In addition, water electrolyte is easy to freeze below zero, resulting in a sharp decline in ionic conductivity. The structure of the electrolyte is very unstable at high temperatures, making it difficult to retain the water molecules inside. Therefore, there are still challenges in developing water electrolyte with high pressure resistance and wide temperature zone. 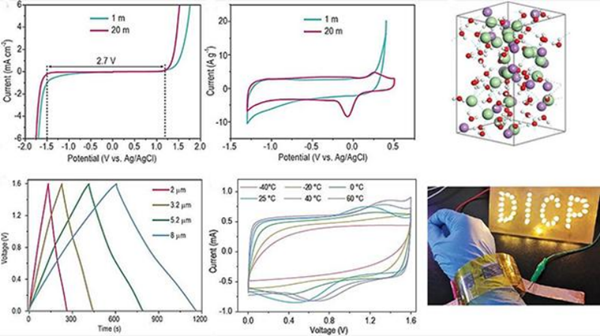 Based on the above problems, the team developed a low-cost and environmentally friendly "lithium chloride in water" high-concentration water electrolyte. By adjusting the reaction kinetics between MXene microelectrode and electrolyte, the oxidation of MXene at high potential was effectively inhibited, thus broadening the working voltage of MXene micro-supercapacitor. And can operate over a wide temperature range.

It is found that the symmetrical planar MXene micro supercapacitor based on highly concentrated lithium chloride gel electrolyte has a working voltage of up to 1.6V and a volume energy density of 31.7MWh /cm3. Due to the ultra-high ionic conductivity (69.5mS/cm) and ultra-low melting point (-57°C) of the highly concentrated lithium chloride gel electrolyte, MXene micro supercapacitors can operate in a wide temperature range from -40°C to 60°C, illustrating their usefulness in extreme environments. This work provides a new research idea for the construction of micro supercapacitor with high voltage and wide temperature region.

In terms of the construction of Mxene-based supercapacitors and batteries, Wu Zhongshuai's team has previously developed multi-functional water MXene ink for high capacitance electrodes, batteries and sensing materials, as well as micro supercapacitors. The MXene microelectrode strategy of ionic liquid pre-intercalation was developed to construct a micro supercapacitor with high specific energy. A 3d MXene - based dendrite-free lithium anode was developed. MXene nanoribbons were prepared by one-step alkalization of MXene, and MXene derived ultrathin sodium titanate or potassium titanate nanoribbons were obtained by oxidation treatment, which had excellent sodium/potassium storage properties.

The findings were published recently in the National Science Review. The first author of this work is Zhu Yuanyuan and Zheng Shuanghao, postdoctoral fellow of group 508 of the Institute.

According to relevant information, the State Key Laboratory of Catalysis Foundation is based on the basic research of catalysis as the foothold, the application of basic research as the combination point, aiming at the international frontier direction and China's major application of key basic science issues, to carry out in-depth and systematic research work.