Local surface plasmon resonance (LSPR) effect is an important means of energy conversion based on light matter interaction, and then regulating the surface electromagnetic field and carrier properties of nanostructures. The construction of high-performance photocatalysts based on the LSPR effect of noble metal nanoparticles has always been a research hotspot in the field of chemistry and materials. The bottleneck problem is that the lifetime of photogenerated carriers in noble metal nanostructures is very short and it is difficult to organically couple with chemical reactions. Metal semiconductor heterojunction can effectively improve the separation efficiency and lifetime of photogenerated carriers, but its utilization efficiency and transmission efficiency are still greatly limited by the Schottky barrier and defect state binding effect at the interface. At the same time, the low intrinsic carrier concentration and narrow optical absorption spectrum of broadband gap semiconductors also limit the improvement of catalytic efficiency.

Mxene based on two-dimensional transition metal carbides / nitrides is a new type of two-dimensional functional materials. It has continuously adjustable electronic structure and rich surface chemical properties from metallicity to semiconductor. It shows a wide application prospect in many fields, such as energy storage, catalysis, environment, biology, electronics, electromagnetic shielding, superconductivity, sensing, separation technology, superconductivity and so on, Its multivariate chemical composition and crystal structure provide a broad space for the regulation of its physicochemical properties and causative functions. Compared with noble metal nanoparticles, mxene has metal like but 4-5 orders of magnitude lower intrinsic carrier concentration and larger two-dimensional light absorption cross section. It has excellent light absorption capacity and significant LSPR effect in the ultraviolet visible infrared region. It has great potential in the efficient excitation and catalytic application of photogenerated carriers, but there is still a lack of systematic and in-depth research at home and abroad. 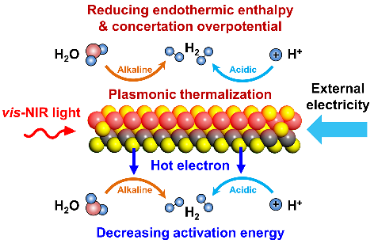 Recently, Professor Wang Zhiyu and Professor Qiu Jieshan of the State Key Laboratory of fine chemical industry of Dalian University of technology cooperated with researcher Wu Kaifeng of Dalian Institute of Chemical Physics, Chinese Academy of Sciences. Based on the unique structure and physical properties of mxene, driven by external electric field, electrochemical catalytic hydrogen evolution reaction was taken as the probe, The mechanism of LSPR effect of mxene with different chemical composition and crystal structure (such as ti3c2tx, v4c3tx, nb2ctx) and the strengthening principle of electrochemical catalytic reaction process are revealed. Using femtosecond laser technology, they found that the LSPR effect of mxene in the visible near infrared spectral region resulted in significant photothermal conversion and sub picosecond hot electron effect; Among them, the photothermal effect reduces the overpotential of hydrogen evolution reaction by providing heat energy and reducing concentration polarization, while the hot electron injection effect is more conducive to reducing the activation energy of hydrogen evolution reaction. Under different pH environment and light irradiation conditions, this coupling strengthening mechanism can increase the electrocatalytic hydrogen evolution activity of mxene by more than 5 times. This work organically integrates the technologies and principles of interdisciplinary disciplines such as condensed matter physics, optics, chemistry and materials, and provides a new idea for the development of a new system of high-efficiency photoelectric response catalytic materials.